As we posted earlier, Neoteric Hovercraft will be featured in an upcoming episode of Discovery Channel’s Aaron Needs a Job, starring the famous TV personality Aaron Kaufman from Fast ‘N’ Loud. In his all-new docuseries, Aaron explores mechanical worlds he’s never before seen or experienced as he takes you across the country to explore motor-driven industries.

Now, let’s give you a sneak peak of the Neoteric episode with some behind-the-scenes photos of the filming that took place at Neoteric’s headquarters in Terre Haute, Indiana …

You can see Aaron’s excitement about being at Neoteric in this photo with Steve Stafford, Flight Instructor and founder of Project H.E.R.O. (Hovercraft Emergency Response Operations) … 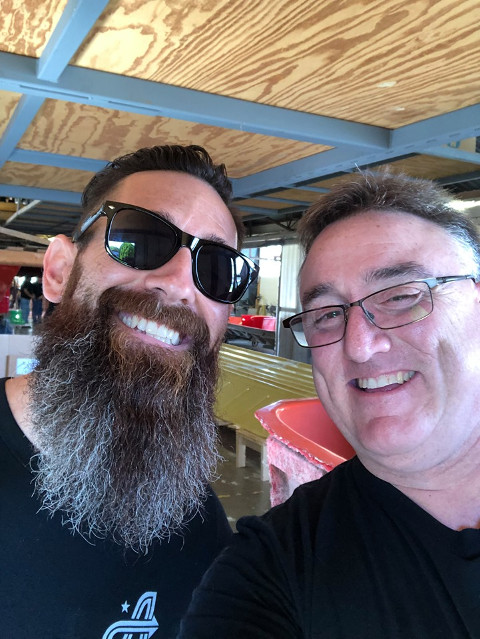 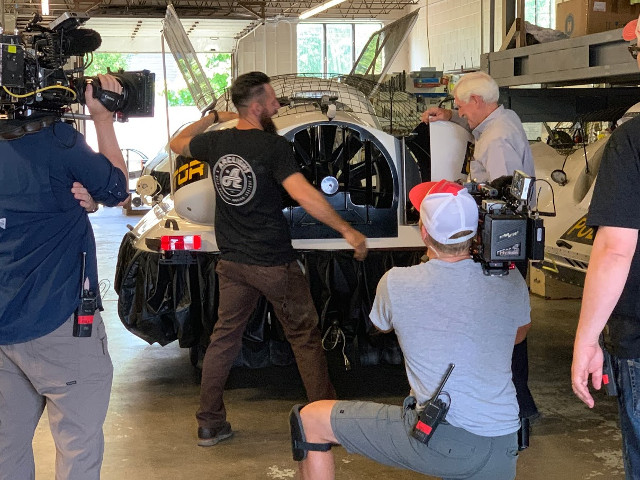 As he learned how to build a Neoteric hovercraft, Aaron observed, “This isn’t mass production – these hovercraft are made specifically for each customer. I’m such a big fan of this type of production, where you’ve got a small number of employees putting their heart into whatever they do. And it’s a thing I can relate to, in my world of manufacturing; we have a small team and we love what we do and we keep things manageable.”


In addition to learning and participating in Neoteric’s manufacturing procedures, Aaron also had the chance to operate a “hovering billiard ball”, one of 15 created for the U.S. comedian Gallagher – although Gallagher’s were built with a billiard ball top, not attached on this model … 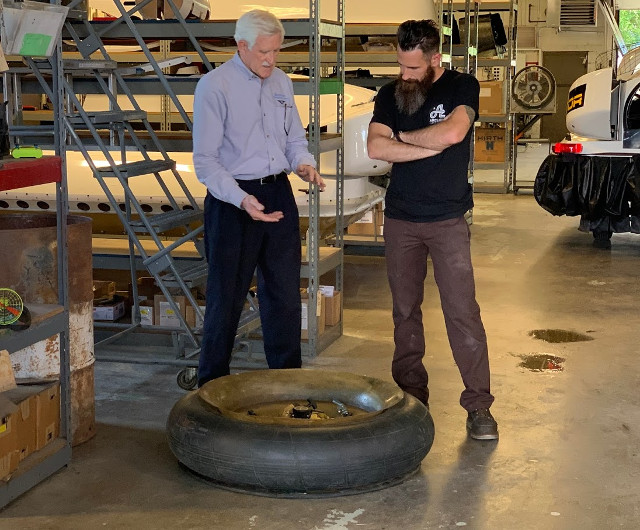 After his time in the factory, Aaron spent the rest of the day learning to pilot a hovercraft on the Wabash River with President Chris Fitzgerald. Here, he readies for his first-ever hovercraft flight … 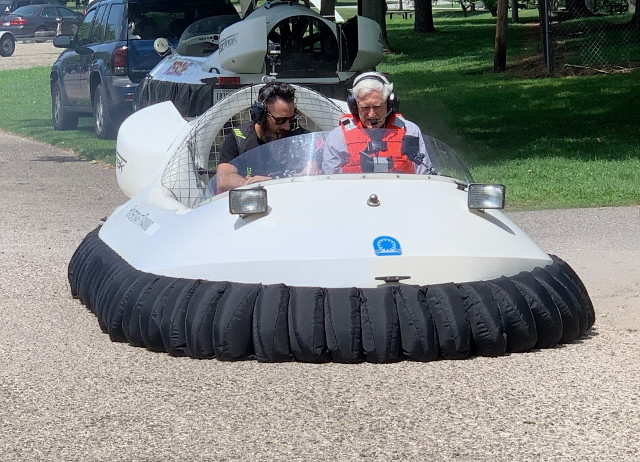 You can see more photos at the gallery link below. And check in with us often here and on Facebook – we’ll have lots more photos and videos of the filming for you before and after the Discovery Channel 10:00 p.m. Monday, September 9 air date of the Aaron Needs a Job episode featuring Neoteric.


In the meantime, you might want to watch the show’s premiere episode, “What’s Old is New”, where Aaron tests a restored Sherman tank and fires the cannon, braves the dangers of coal mining and works on a steam train that has run for 150 years.

And don’t miss tonight’s episode, “Salvaging Speed”, where he flies an F-18 fighter jet, shreds old vehicles and takes on the world of tires at 10 p.m. on Discovery Channel.

Wildly popular Fast ‘N’ Loud star Aaron Kaufman is stepping out of his comfort zone in a big way as he dives headfirst into mechanical worlds he's never experienced before … including the world of Neoteric Hovercraft!


In a new Discovery Channel series, Aaron Needs a Job, Kaufman takes you on a wild ride around the country as he explores exciting motor-driven industries. He says, “I quit my job and walked away from Fast 'N’ Loud to pursue my passion for racing…and it nearly broke the bank…I am exploring the country in search of incredible places, industry and people that keep America running.” 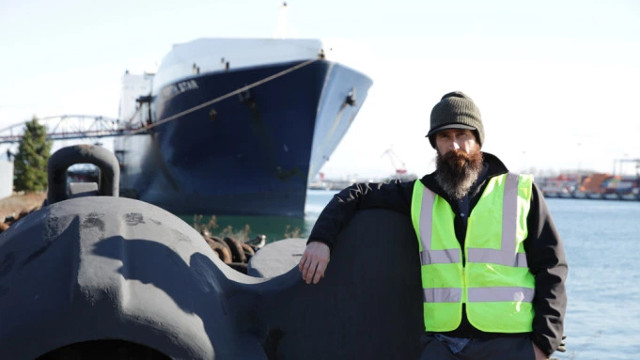 Aaron and his film crew are at Neoteric this week to film an episode of the new series featuring Aaron building and flying a hovercraft with Neoteric President Chris Fitzgerald.

The producer, Lionsgate’s Pilgrim Media Group, says, “We chose Neoteric because we liked Chris' history with hovercraft and that he is one of the pioneers in hovercraft manufacturing. We liked that Chris also trains people to operate hovercraft as we wanted Aaron to have that experience. And, we liked the innovations that Neoteric has made to hovercraft with the reverse thrust system, etc.”

Neoteric is in good company! The series also includes visits to NASA, a Colorado coal mine, Nevada firefighters, the underbelly of the Las Vegas service industry, and much more. 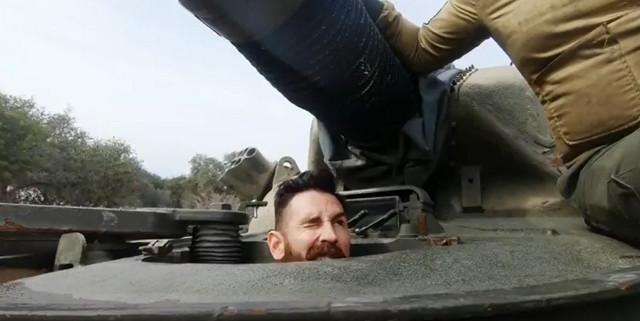 Neoteric is honored to appear in this series and to be considered one of the "incredible places, industry and people that keep America running."

Stay tuned! In the next few days we’ll be posting photos and videos of the filming and more.

The episode featuring Neoteric is tentatively scheduled to air SEPTEMBER 9.

"Its versatility is what made the hovercraft a game-changer for water rescues, Chief McElfresh said. “It can run over mud, dry land, the road, on water and swift water.”


The latest floodwater rescue tool a fire department in central Jackson County has added to its arsenal of response vehicles has drawn plenty of curiosity from the public.

“You almost have to wait until late at night to go to the gas station,” Brownstown Volunteer Fire Department Chief Travis McElfresh joked. “Everywhere you go, people like to ask questions about it and see it up close.”

That mysterious, bizarre-looking craft is the department’s new Neoteric Hovercraft it purchased June 15.

During a recent discussion about the hovercraft outside the department, the vehicle drew a few passersby who wanted photos or more information about it.

A demonstration of the hovercraft on County Road 25E in Brownstown near floodwaters from the East Fork White River also drew a small audience who were eager to see it operate.
The oval-shaped craft is worth seeing, as the bottom is made up of 66 black fabric bags connected by heavy-duty zip ties and makes plenty of noise as it gears up. It is maneuvered by handlebars like a motorcycle and can reach a top speed of 70 miles per hour, but it is not recommended to go that fast. McElfresh said the craft can top out at 45 miles per hour on the water and 65 miles per hour on the ice.

The Neoteric Hovercraft is manufactured in Terre Haute and differs from boats and other hovercrafts in that it can go in reverse.

Hovercraft utilize one or more fans or propellers to create lift and thrust. Lift air is captured in a flexible fabric skirt, causing the craft to hover above the surface. Thrust air is directed backward to move the craft forward.

On June 15, McElfresh and Assistant Fire Chief Mitch Noelker received training on the Wabash River and returned late that night. Three hours later, the hovercraft was dispatched to its first rescue.

Since then, the department has used the four-seated craft to conduct 11 rescues involving 14 people, McElfresh said.
Those numbers earned them recognition from Neoteric in a post on the company’s blog.

“In Neoteric’s more than half a century in business, never has a fire department gone immediately from hovercraft flight training to performing a series of successful high-risk floodwater rescues,” the company wrote in its post.

The department had been considering purchasing a water rescue craft in the last year because of the number of water rescues in the area, McElfresh said. Between Jan. 1 and June 18, Jackson County had 55 calls for water rescues with nearly a third of them since June 1. There also was a high number reported during a recent span when the county received 8.24 inches of rain in seven days.

When a group from the department attended the fire convention show in April, they found the Neoteric, which was demonstrated for them on floodwaters afterward.

After discussions with the fire board, which controls the department’s budget, the department moved forward with the $40,000 purchase. McElfresh said the department kept in mind what other resources were available throughout the county, which is why they settled on a hovercraft.

“The sheriff’s department has a johnboat, conservation has an airboat, so we decided to get a hovercraft,” he said. “All three of them can do different things. The johnboat can go places the airboat can’t. This can go where it can’t, vice versa. We didn’t want to double up on resources in the county.”

Its versatility is what made the hovercraft a game-changer for water rescues, McElfresh said. “It can run over mud, dry land, the road, on water and swift water,” he said.

When flying over land, there’s a 9-inch clearance. “If you come over a 9-inch log laying in a field, you just cruise over it like it wasn’t even there,” McElfresh said.

The craft also has the capability to go in reverse, which is not an option with an airboat. It also can turn 180 and 360 degrees. “When you’re pulling up to a vehicle, it makes it pretty easy,” McElfresh said.

During a recent rescue, a man was walking through floodwaters. McElfresh said the man was about 4 feet away from walking through swift-moving water. First responders told the man to stay put, and McElfresh was able to work the craft to the side until they could safely rescue him. “We were able to get right up against him and pull him up,” he said.

The greatest benefit might be its role in assisting with rescues on ice. The craft will allow crews to make a rescue without putting weight on the ice. “You’re hovering on air and move on the ice without busting it up,” McElfresh said.
So far, McElfresh and Noelker have received training to operate the hovercraft. McElfresh said once they get more hours behind the bars and get more comfortable, four others at the department will receive training.


The group also joined Project H.E.R.O., which stands for Hovercraft Emergency Response Operations, a nonprofit that serves during natural disasters. The department will receive additional training through that organization.

“We’ll do joint training on the Wabash River,” McElfresh said.

Have you ever questioned the importance of hovercraft flight training? If so, you need to read this amazing story of Indiana’s Brownstown Volunteer Fire Department’s recent flood rescues.

In Neoteric’s more than half a century in business, never has a fire department gone immediately from hovercraft flight training to performing a series of successful high-risk floodwater rescues. In fact, our training protocol strongly recommends that each pilot, after training, has a minimum of 5 hours of practice flying their hovercraft before carrying passengers. But when lives are at risk, dedicated first responders sometimes have to break protocol …

Brownstown Fire Department at first considered buying an airboat for their water rescue operations. Then they saw a Neoteric rescue hovercraft in action at FDIC International (Fire Department Instructors Conference) and immediately recognized the advantages of a hovercraft with reverse thrust over an airboat. 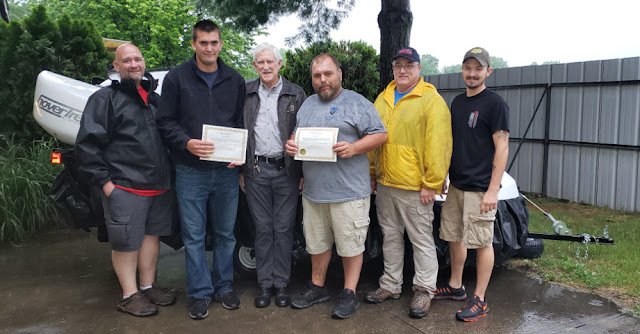 Here’s what happened next, in Chief McElfresh’s own words …

“We arrived back at the station around 11:45 that night. Little did we know that only 3 hours later we would be launching our hovercraft on its first rescue, where we were able to successfully rescue a young man stranded in floodwaters caused by the nearly 7 inches of rain we had received in 2 days … while we were still receiving heavy downpours.

“Another call came out at noon on the 16th. We were en route to check a vehicle that was totally submerged in floodwaters. But we were diverted from this call to rescue an elderly gentleman who had become stranded while trying to travel through a flooded rural road. After completing this call we checked the vehicle totally submerged and found it to be unoccupied.

“At 5:30 p.m. we were dispatched again to rescue a woman who attempted to drive through floodwaters and became stranded in her minivan, with water deep enough to reach the seats in the vehicle.

“We successfully made all rescues with no incident and no injuries - thanks to the top notch hovercraft from Neoteric and the outstanding training we received from Steven Stafford and Chris, the owner of Neoteric.” 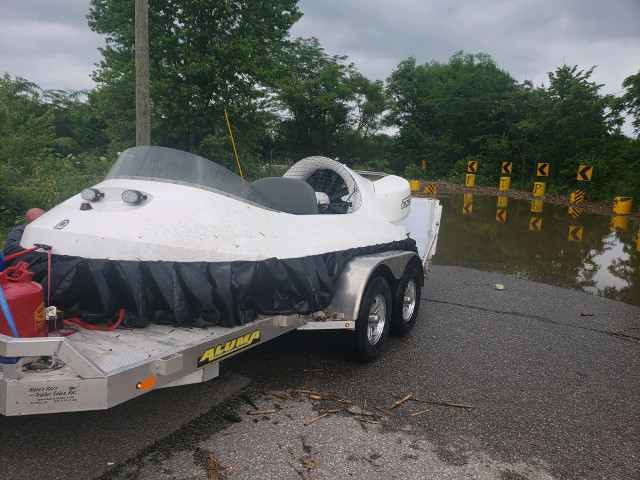 We at Neoteric congratulate Chief McElfresh and Brownstown Fire Department’s first responders for their courage, determination and their prompt response in dire circumstances … and for being such fast learners in their flight training course!