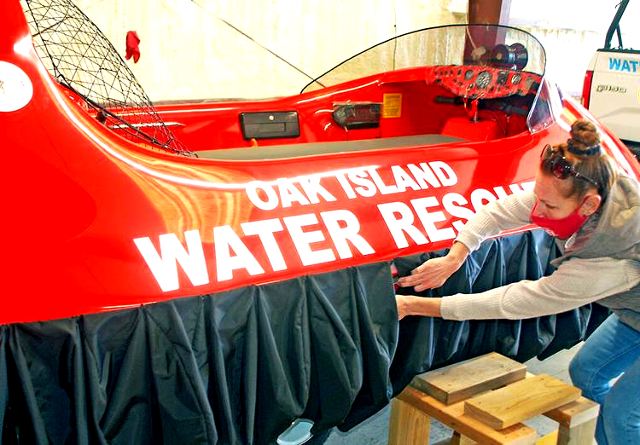 Oak Island Water Rescue has acquired a hovercraft specially designed for use by emergency responders.

The department is now among the few in the Southeast with such a tool. Made by Neoteric Hovercraft, Inc. of Terre Haute, Indiana, the craft weighs a mere 480 pounds but can lift a payload of 800 pounds, said Tony Young, Water Rescue Chief. Responders hope it will be of service when someone gets in trouble in the area’s numerous marshes. In the past, responders have struggled to reach stranded kayakers using a jon boat. In one instance, it took the Brunswick County Sheriff’s Office airboat to get to victims grounded on the mud flats and surrounded by beds of sharp-shelled oysters.

“The beauty of this is that you can go from the marsh to the beach,” Young said. “It’s the next best thing to having a helicopter.”

The hovercraft uses one-third of its power to lift the craft; the rest provides thrust. Powered by a German-made two-stroke motor designed for small airplanes, the hovercraft has only 65-horsepower but can go as fast as 60 mph under ideal conditions, such as on ice.

“What makes this unique for rescue is that it has thrust reversers to stop, spin around or go backwards,” Young said.

The specialized skirts around the edges of the hovercraft hold it on a cushion of air. The skirts must be maintained and kept clean to work at their best.

It takes at least 30 hours of training to learn to pilot the hovercraft. Simple actions, such as leaning too far one way or sticking an arm out while under power can affect the sensitive steering. “It’s tricky,” Young said. “It’s not like driving a boat. We’re taking bets on who puts the first scratch on it.”

Young said an anonymous donor contributed the $60,000 needed for the hovercraft. The same donor also made a substantial contribution toward repairing the station from the damage caused by Hurricane Isaias last August.

Work on the station has slowed and Water Rescue is discussing the possibility of adding a second floor for offices and using the downstairs portion as a garage and workshop. Members expect to have a contractor on the job by next month.

With the support from the community, the Town of Oak Island and Brunswick Electric Membership Corp. the team was also able to replace an aging surf boat with a newer, slightly larger model with a tougher aluminum hull.

The storm took a toll on the station, but members said they’re building back better than ever, with a lot of help from donors.

“The community really came together to support us,” said team member Melissa Wilson. “The storm was a blessing in disguise.”