1) The dramatically rising risk of flooding and 2) The effectiveness of Neoteric Hovercraft in flood rescue operations.

Myall says, “I’m 64 and gearing up for what I want to do when I retire. So I thought, how can I help others? In recent years we’ve had major catastrophic floods in Texas, and predictions say we’re facing even more flooding and it will be more severe. So my thoughts turned to how I might provide assistance.”

He’s absolutely correct. The National Oceanographic & Atmospheric Association reports that 2019 was a record-breaking year of flooding and they expect that every year for decades to come will break the record over and over again.


What led Myall Hawkins to hovercraft?


Myall explains, “I live in a gulf county and from any storm coming in from the gulf coast, we’re going to be impacted first. Our first responders get overloaded. In 2017 with Hurricane Harvey, the Cajun Navy came in. Our Louisiana neighbors came in with flat bottom boats, airboats, cruisers, whatever they could.

“I became interested in how I could help. I bought an inflatable boat that’s good for some flooding events. But when I talked to first responders, they had plenty to say about the problems with boats in flood rescues, the main one being that outboard motors and propellers are easily damaged or lost. During Harvey, boats capsized and rescuers had to be rescued.

“And most flooding is residential, so you often have one neighborhood under several feet of water, the next neighborhood may have hardly any, and in between the two are dry streets. So if you had a boat, you could only go so far.

“So I started researching flood rescue equipment that can handle swift water, shallow and deep flood water, and transition between grass, mud, sand, water and other surfaces – and came across hovercraft. I didn’t know anything about them, so I started searching online. There were different hovercraft companies out there, but I quickly learned that most first responders use Neoteric rescue hovercraft.”


Why a Neoteric hovercraft?


His next question was why most fire departments and rescue agencies choose Neoteric hovercraft. He says, “I discovered it’s because it’s the lightest weight. It’s got the highest horsepower. And it’s got reverse thrust, giving it maneuverability that’s just phenomenal. You can brake, turn, fly backwards, hover in place and fly easily right up to victims. No other hovercraft can do all that.”

After his thorough research, Myall purchased a pre-owned 6-passenger Neoteric rescue hovercraft. His first step after that was to undergo flight and maintenance training at Neoteric. “I would never operate a hovercraft without proper training,” he says. “That would be really foolish.”

Here, Myall learns to fuel his hovercraft as he begins his flight training with Neoteric President Chris Fitzgerald at the Wabash River in Terre Haute, Indiana …

Myall’s training was his first experience in a hovercraft. His reaction? “Flying a Neoteric is phenomenal! You definitely don’t experience its capabilities until you get out on the hovercraft. You can read about it, you can see a video and that’s nice, but then you fly it yourself and oh, yeah, I can just imagine what we can do with this. It definitely is a performance machine.”

One aspect Myall noted was the hovercraft’s easy transition between different surfaces. “We went down the boat ramp and onto the water at a decent speed and you don’t feel the transition at all – it’s completely smooth – even going sideways. I was really surprised.” … 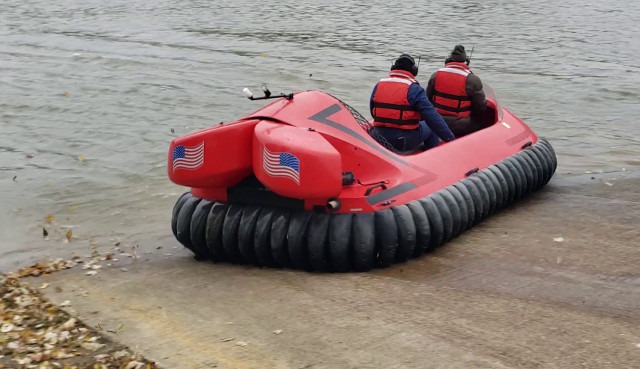 Back at Neoteric headquarters after successfully completing his flight training, Myall (left) receives his certification from President Chris Fitzgerald ... 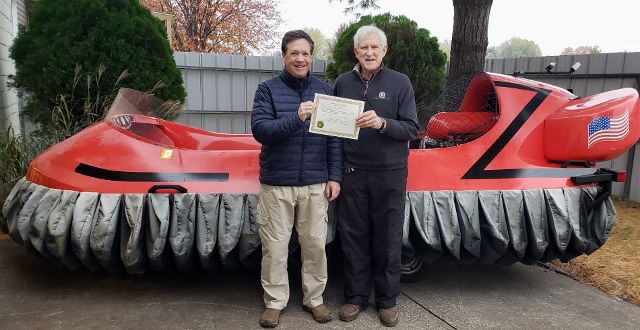 After Hurricane Harvey, Myall reports that many civilians in Texas have come together to assist in flood rescue efforts, and he plans to join them. Numerous websites have been set up where these volunteers can list their equipment, their training, their location, and what they can do, then first responders call on them for help.

In the meantime, Myall explains, “My hovercraft was built in 2011. My next step is to have Neoteric upgrade it with current rescue features. I’ve told Chris I don’t want it quickly, I want it right, so whatever it needs, let’s do it. Then I’ll have it shipped to me in Texas.”

“Now that I’ve finished my initial standard training,” he says, “when the hovercraft is shipped to me, I’ll get more hours of experience in it, then come back for second level rescue training. So that’s my goal: get hours on the craft, get very comfortable with its operation, undergo rescue training and hopefully help save lives in future flooding.”

And a side benefit is that when Myall's hovercraft is not in use as a flood rescue vehicle, he can always enjoy it as a recreational hovercraft for river cruising, fishing and much more!

The importance of hovercraft in the future

There are few places on Earth where flooding is not a growing concern. Flooding is the #1 natural disaster in the United States, and of all U.S. weather-related disasters, floods are the main cause of death. The National Weather Service reports that 2019 was the wettest year in recorded history - 124 years -  and the frequency and intensity of floods will continue to increase.

Hovercraft are a critical rescue apparatus for flood rescue operations. As Myall Hawkins – along with first responders in more than 50 nations - have recognized, the Neoteric rescue hovercraft, with its exclusive patented reverse thrust, greatly tops the maneuverability of other hovercraft on the market. It performs safely in debris-filled, shallow, fast-flowing flood water and allows rapid up-close access to victims while keeping first responders above the danger – not in it.

The Mansfield Fire Department in Texas, who operates a Neoteric rescue hovercraft, sums it up quite accurately:  “The benefit of having the hovercraft is we do not have to send our personnel into the water to retrieve victims. It can also hover over logs, car tires and any other debris, unlike boats that could be a hazard in flood water. A hovercraft is the answer to a faster rescue – a safer rescue.”

Experience first-hand what a Neoteric hovercraft can do for you: