Using puffs of air to float a 7,000-pound building to a new location may sound a little far-fetched. But it took only a few guiding hands on Friday to move a steel structure about 300 feet while it floated on skirts holding a cushion of air underneath it. The seemingly gravity-defying feat was pulled off at Neoteric Hovercraft Inc., a Terre Haute company that has become adept at doing things differently. 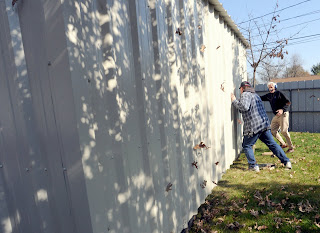 “I didn’t want to bring a crane in,” company president Chris Fitzgerald said as he oversaw the project Friday morning. “The power lines overhead prevent that. And I didn’t want to mess up the landscape or the trees.” 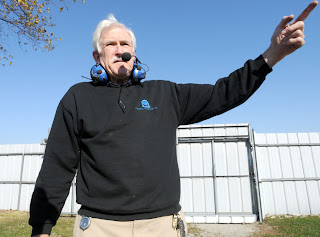 The all-steel building was constructed at Neoteric’s manufacturing site on Tippecanoe Street. It was moved on the property to a spot near the main office, and will be used as fireproof storage for films, videos and documentation of the company’s efforts during the past 30-plus years.
From the air pressure needed to lift the building, using just two hovercraft fans at either end, Fitzgerald said the building’s weight was calculated at 7,060 pounds. As the fans hummed away, a crew used ropes at its corners to guide the floating structure around one large building, through a maze of young oak trees, and onto a grassy slope that presented a bit of a challenge in keeping the building level. 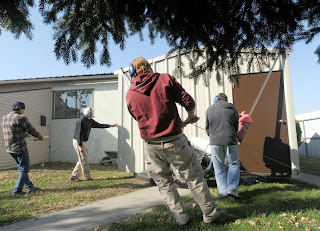 “We’ll have to as adjust as they go,” Fitzgerald estimated, checking out a 12-foot gap between the trees. A suggestion for a tree saw was rejected. “That’s cheating,” Fitzgerald declared.

Totaling up the float time, it took around five minutes for the building to travel to its new location. The Neoteric staff took on the challenge with the gusto of kids trying to build the perfect mousetrap. “And this was done with a disorganized football team,” Fitzgerald said after the move.

But the concept of moving a heavy object on a cushion of air is nothing new for Fitzgerald. He has created a hoverlifter that is used to move half-ton units around on top of a 140-acre factory roof. That company used to have to shut down factory operations while a helicopter was brought in to move the rooftop units. But Fitzgerald designed a vehicle that could carry the units along a series of rooftop ramps, eliminating the need for the helicopter and allowing factory work to continue inside during the process.

Fitzgerald easily demonstrates the concept of hovering an object by puffing air at a piece of paper lying flat on a table. The gust lifts and moves the paper. By laying quarters on the paper, the paper’s direction is adjusted. That may seem an oversimplification of the process, but a hovercraft operates on a similar principle of weight balanced on air. The jupe, which is French for petticoat or skirt, controls the amount of air needed to lift the object.

Inside the two large buildings on the Neoteric property, hovercraft are made from start to finish. The bodies are created from molded fiberglass and are attached to foam-filled hulls. The engines, controls, seats and other systems are added according to the purchaser’s specifications.

Hovercraft have many uses, whether recreational, rescue, commercial or military. They can hover along multiple terrains, moving swiftly along land, mud, asphalt and water. Since it hovers on a pocket of air, it can pass above debris and reach places unattainable by boat or all-terrain vehicle.

The company currently is building a concept craft for the U.S. Navy. And several of its machines are used by law enforcement agencies and rescue teams as well as the military. Neoteric also rehabs and services vehicles it has built.

One current customer uses a Hovertrek™ for his pond maintenance business. He can spread chemicals in the water and easily access ponds and lakes without damaging the landscaping or environment around the water. A Massachusetts company uses one of Neoteric’s hoverlifters for its cranberry-growing operation.

“They are almost an unknown vehicle,” Fitzgerald said of hovercraft, but he hopes that changes as the Internet helps publicize his product to a worldwide market. In the meantime, Fitzgerald used Friday’s demonstration of moving the building as an example of how a different, but time-proven technology can be used to simplify a weighty situation.
Posted by Neoteric Hovercraft, Inc.